What is an ICO?

What is an ICO, a term that you probably have seen a lot, especially during a Bull Market.
But during a Bear Market, you don’t really hear about them anymore as there are no money for ICOs…

You can check out our crypto dictionary to see the meaning of many terms used in the crypto market: https://bitcoincryptoadvice.com/cryptocurrency-dictionary/

The appearance of encrypted currencies has led to the creation of a whole market that revolves around. With the new innovative ideas, we have been able to create new investment methods and the trading is done more and more on virtual and online platforms. The great interest in cryptos is mainly due to the boom in Bitcoin in 2017. Its value of $ 20,000 end of 2017 has made it the most successful asset. The influx of new investors has led to the creation of a new project financing system called “ICO”.

So how does ICO work, and how can we benefit from it?

The particular points presented by ICOs unlike conventional investments

ICOs have the best profitability.
Because of its high volatility, encrypted money makes it possible to reach hugely highs in terms of profits. In addition, with the new cryptos that are created periodically, it is possible to multiply the income on its basic investment.
There are several ways you can make your investment in cryptocurrency profitable. A recent method inspired by croudfunding is to collect a phenomenal amount of money before launching crypto in order to solidify its position. This method is called ICO, and of course, its operation is not limited to that. So, instead of spending the day trading cryptos like most traders do, it’s possible to simply invest in the ICO of a crypto that has potential and resell once it has taken over value after its appearance on the market.

You will also enjoy other benefits such as tokens which will explain the operation later. What is important to remember is that the ICO (Initial Coin Offering) works like the IPO (Initial Public Offering) that exists on the stock market. We propose you here to discover all the subtleties presented by the ICOs to enable you to determine the best of them.
But unlike an IPO, you don’t get a share of the company but just tokens.

Definition of ICOs (Initial Coin Funding) in a nutshell

With the arrival of the “Croudfunding” system used to finance projects that appeal to the public, the idea of using a similar system to launch currency cryptos was not too long. It should be noted that the essential difference lies in the fact that the cryptos ICO runs on the blockchain generally.
There are also start ups who have seized this opportunity to have the necessary funds by launching ICOs in turn. However, it is not easy to launch an ICO. Here are the most important points that you will always need to go through:

This is the base on which the ICO is established.
Given the difficulty of launching an ICO, the creation of the so-called “White Paper” can be seen as a major technical hurdle that requires hard work to finalize properly. It therefore requires to make available to investors all information that may interest them.

Indeed, providing limited information can make you lose a lot of investors and therefore a big part of the funds. That’s why a good “White Paper” will give them a better idea about the ICO and thus, they will feel more confident when they invest their capital.
Moreover, a clear and well-written “White Paper” will motivate them even to invest more. On the other hand, the correlation that it will have with the “Smart Contract” will give more clarity to the project of the ICO and will help you launch it in the best conditions. In short, whether you are an entrepreneur who launches an ICO or an investor looking for a good ICO to invest, a well-written “White Paper” with a good smart contract can only be welcome. In other words, these two elements are the key to a good investment.

THE CREATION OF A “Smart Contract”

The Smart Contract must be in agreement with the White Paper.
As mentioned above, a “Smart Contract” is an excellent indicator of the future state of crypto. If the ICO has an excellent “White Paper” with a “Smart Contract” that has no contradictions and no fuzzy parts, it is likely to succeed. However, being able to detect good ICOs based on these two elements can be difficult since it requires a great deal of knowledge in the technical field.

When in doubt, it is strongly recommended to turn to experts. No price will be too expensive to guarantee the success of your investment. Unfortunately, investors often fail to take this phase seriously and decide to follow their presentiments. It goes without saying that this method is not very reliable and the results are not always positive.

To explain the operation of “Smart Contracts” we will just say that it is strongly linked to the various exchanges that are done on the blockchain to ensure the receipt of tokens, all according to the data found on the “White Paper” “. It will therefore be necessary to be informed of the content of the latter, if we want to avoid unpleasant surprises.

What are tokens and how can we benefit from it?

The “White Paper” will contain the most important information about tokens. For example, you can find the number of tokens an investor should receive, depending on his choice. The various possibilities placed at its disposal are also listed.

One can also consider the fact that tokens can represent an excellent added value that will help the ICO to better position itself in relation to competitors. However, it will not in any case share shares contrary to what one might think. They are radically different from stock market for example.

In addition, the distribution of tokens vary according to the ICO. The best of them propose to distribute the tokens in a fair way between the investors and the creators of crypto. But this type of distribution is becoming more and more rare, and we unfortunately find that creators tend to have the biggest share of the majority of ICOs launched in recent years.

Finally, an excellent tool to pay attention to is the so-called “Listing”. The latter will help you get a better idea about the level of stability that the tokens will have. Thus, you will be able to make a ranking of future cryptos even before their launches and judge their value against different currencies such as the Dollar, Euro or the Swiss Franc for example.

Note that the listing will take a few days before displaying the new tokens. The main reasons for this relate to technical procedures and obtaining approvals from different platforms. Some investors take advantage of this time to better study the price of the coin and enjoy the best if the latter shows bullish signs.

The world of ICOs is teeming with scammers

Scams cause the loss of hundreds of thousands of Dollars each year.
No doubt because of the fact that they require a great knowledge, the ICOs are the main target of some small groups that specialize in scams.

We can think of the case of “Bitconnect” which was a real fiasco and which caused the loss of huge amounts of money to different investors.

Be reassured, it is unthinkable to fall into the trap of this kind of thieves if we make a good study of the “White Paper” and the smart contract. Indeed, if you look well, you quickly realize the lack of clarity of the documents they present. Often, the flaws are so obvious that even a lambda investor who lacks experience in the field can be aware of the different contradictions that are there.

Always refer to the “White Paper” and the “smart contract”

As already mentioned, the “White Paper” and the “Smart Contract” are the two essential elements when studying the possibilities offered by an ICO.

To do this, you must scrutinize both documents in their smallest details. This may, in fact, in some cases take a little more time and effort than expected but it is an essential phase of the study of investment. It is therefore crucial not to rush them and read them with maximum concentration and attention. It should also be remembered that the most dubious of them will present data that is not intentionally clear to create confusion for the investor and push him to go beyond.

You can watch this video explaining what is an ICO:

The ICO of “Ethereum”
Ether ICO is definitely a safe bet. The fundraising effort by the creator of the Ether was made on Bitcoin, another ultra strong and best known currency in the world. Although the ICO clearly lacked “Smart Contract”, this is a feature of the Ether and not a lack of seriousness on the part of the team that launched the ICO. To say, that there are always exceptions. After just over a month, investors sold over 60 million Ethers on the global market. The value of these exchanges has exceeded 31,000 Bitcoins. In the end, it was found that the unit was sold for just over $3; which was phenomenal for a new crypto. However, those who did not sell saw the value of Ether climb to nearly $250, only four years later.

What can be said about ICO in the end?

ICOs currently represent one of the best and most profitable investment opportunities in the short and long term. In addition, they guarantee the benefits if the studies are done on a good basis. Certainly, it is not easy to distinguish good ICOs from the worst, but it is possible.

You just have to do the necessary research and study the documents provided in every detail. This will help you avoid “scams” and limit your research and studies to a small number of ICOs, for optimized profitability.

At the end of 2017, the Bull Market gave rise to ICOs of madness with astronomical and ridiculous amounts sometimes in comparison with the size of the projects. 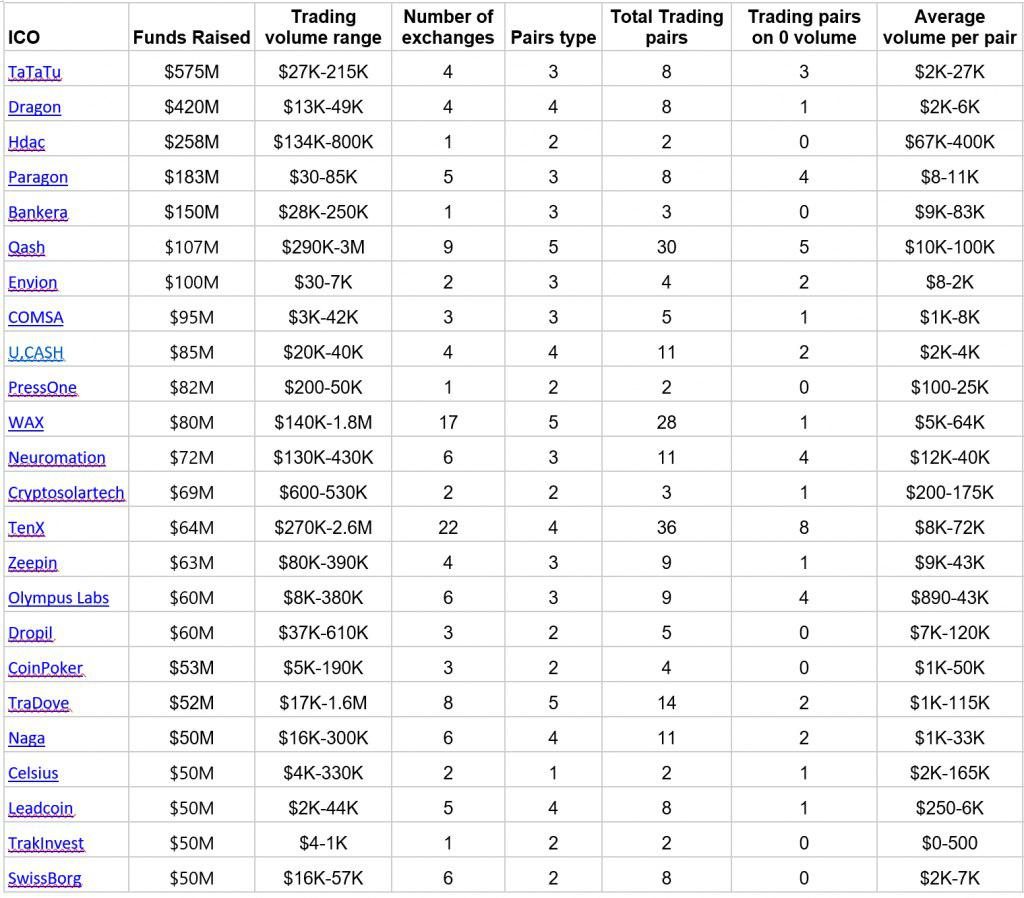 And there are many others, who still have not released any product but have raised extravagant amounts.

The SEC, Stock and Exchange Comission in the US is starting to get into the ICO and sue the fraudsters.
The ICO market will eventually be completely regulated at one time or another.

So, there are good projects where you can invest and others that are very risky from a financial point of view.

For an overview of all ICOs that already exist, you can go to Coinmarketcap, you will find all the tokens and crypto-currencies on the market: https://coinmarketcap.com/

Do your own research before investing any money, this is not financial advice, you alone are responsible for your decisions, do not invest the money you need, or hire a professional financial advisor.
Read the white paper of the projects, see who is on the team, where they are located, etc…