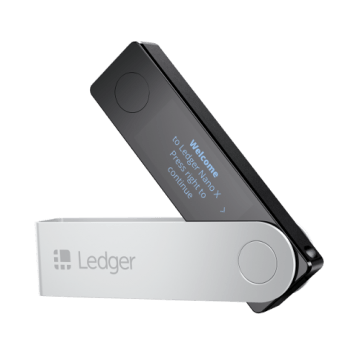 The Ledger Nano X was released during the CES 2019 in Las Vegas.

At the CES 2019, the French company Ledger has formalized a new version of its cryptocurrency storage portfolio: the Nano X.
This one takes the succession of the famous Ledger Nano S which has sold more than 1,5 million copies worldwide and has greatly contributed to the reputation of the company.

The Ledger Nano X comes with convincing new features such as Bluetooth or management from a mobile application, we did the test.

Introduction
Security is an essential element when looking at cryptocurrencies.
Because transactions in these virtual currencies are – by nature – irreversible and (to some extent) anonymous, a hacker who has access to a user’s crypto-currency reserves could easily steal his fortune without leaving a trace.

It is for this reason that it is essential to know how to store your crypto-currencies when you decide to buy some.
There are two ways to store currencies today: online storage and offline storage.
The solutions developed by Ledger are “cold wallets”, offline storage wallets (also called “hardware wallet”) that are not connected to the internet and are therefore known to be particularly secure.

Thus, hackers roaming the internet can not access it, and funds are safe.
This also means that wallets that are stored online have a higher probability of being hacked.
Since it is a question of storing several hundred or thousands of dollars in crypto-currencies, it is strongly recommended to leave on a cold wallet like the Ledger Nano X, for example.
Beyond the security of a device that is not connected to the internet, the Ledger Nano X has other security mechanisms that allow to offer a solution without risk for the user. We will see all this further down in the test of this Ledger Nano X.

Let’s start with the design of the new Ledger Nano X wallet.
This is quite similar to the previous version since it still looks like a small USB key – nevertheless slightly larger.
If the Nano S has two small buttons that can navigate the screen and are located on the upper side of the case, the Nano X integrates these two circular buttons more discreetly on both sides of the screen, on the front surface of the device.
This does not obstruct the readability of the screen, quite the opposite. On the new model, the screen is also significantly larger since it goes from 128 x 32 px to 128 x 64 px.
The quality of the display is also higher on this new model, which facilitates the management of applications and transactions via the screen.

One of the big news for this Ledger Nano X is that it can now be controlled in Bluetooth with a mobile application on a smartphone with iOS 9 (or newer) or Android 5 (or newer).
This was not the case of the previous Nano S which necessarily required a USB cable to connect with a computer and read the content of its portfolio on the Ledger Live web application (link for iOS and Android apps here).
For those who do not want to use Bluetooth on the new Nano X, it is still possible to disable it in the control center accessible from the wallet screen.

In the box of the Ledger Nano X, there is still this cable that can connect to a computer in a more traditional way like the Nano S (but much more complicated) for those who prefer this method.
At the bottom of the Nano X, there is a space to insert the USB-C connector.

It is also this same cable that will allow the Nano X to be charged.
Ledger announces several hours of autonomy in intensive use of the device (with the screen on) and several months in case of weak use.
Unlike the Ledger Nano S, which necessarily requires a cable to turn on, the Ledger Nano X integrates this battery of 100 mAh which offers a relative autonomy to its user.
This is a good point since it allows you to travel light without having to carry cable (or computer since the Nano X is also controlled from a mobile application on a smartphone).

Finally, the last item in the box of the Ledger Nano X is a card that makes it possible to write down the recovery phrase which is composed of 24 words, and which makes it possible to get your crypto funds back even if you lose your wallet.
This sequence of words that must be written down (and kept in a secure place) allows to regain access to your cryptocurrencies in case of loss of the Ledger Nano X.

It is one of the multiple security measures implemented in the solutions imagined by Ledger to ensure the funds of its users.
For those who want to transfer their crypto-currencies from their old Ledger Nano S to the new Nano X, they will just enter this recovery sentence to see their funds appear on the new device. 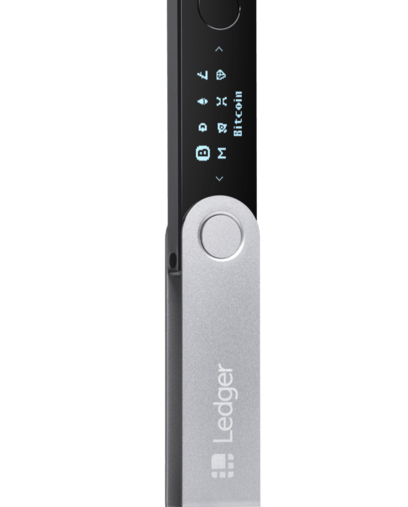 How the Ledger Nano X works.
Download Ledger Live mobile app.
As its name suggests, the Ledger cryptocurrency storage portfolio allows to “stock” your crypto funds.
In other words, it does not allow you to buy – or sell – electronic currencies. It is therefore a physical space on which one can store its funds safely, and out of reach of an Internet connection. It will first have to buy on a cryptocurrency exchange platform, or recover some way or another through an exchange with a third party.

Until now, the previous models of wallets at Ledger required a USB cable to supply or lighten the account.
These “cold wallets” were necessarily connected to a computer and the web application Ledger Live allowed to manage its funds. Even if the computer is connected to the internet, the Ledger portfolios are safe since each transaction must be validated by a manual action of the user on the physical wallet (by pressing the buttons).

In the case of the Ledger Nano X, we now have 2 solutions to manage your funds and make these transactions in cryptocurrencies.
The first possibility is the one mentioned in the previous paragraph (and which is also valid for the Nano S) with a cable system that connects the physical portfolio to a computer.
The second, which is brand new, allows you to control your wallet with Bluetooth and a mobile application (smartphone applications iOS 9+ or Android 5+ to download here).
It’s a real revolution, it gives you more flexibility, and the associated mobile app is much more intuitive.
There is no need for cable for the screen to be turned on thanks to a battery that offers a good autonomy.

To control the physical storage portfolio, it is mandatory to download the mobile application Ledger Live (or otherwise, the desktop application for computers).
It will be available from January 28, 2019, about 2 weeks after the formalization of the new Ledger Nano X.
Older models such as the Nano S and Nano Blue will never be compatible with Bluetooth and they must compulsorily require a cable connection.

Nevertheless, users of Android smartphones will be able to “soon” connect their Ledger Nano S and Nano Blue with a smartphone (and no longer the computer) thanks to the USB-C cable provided in the box.
This will allow them to access the Ledger Live app on their mobile. However, this will never be possible for users of Apple smartphones (iOS) since the Lightning port imposes a number of restrictions.

Ledger Live Mobile App Management.
The mobile application Ledger Live is the adaptation of the computer version that existed until now. It is also particularly intuitive – and it’s even easier to handle than the computer version.
For those who want to get into crypto-currencies, this may be the easiest way to store their funds today.
It is secured by either a standard password or a face recognition system (such as FaceID on the iPhone).

In total, 100 applications can be downloaded to the wallet (so 100 icons on the Ledger Nano X screen), 10 times more than was possible on the previous Nano S.
Next to each application on the Ledger Manager, there is a small download (or removal) icon that allows to install it on the wallet.

You can of course still send and receive funds on the Ledger Nano X, just follow the instructions to do so as you can also connect to a third party wallet like Myetherwallet, etc…

Ledger has created a lot of sensation by releasing the previous Nano S – and that’s why it has sold more than 1.5 million copies worldwide.
This new version becomes even more user-friendly with a mobile and flexible solution at a time.
The Bluetooth integration is a strong argument, which its most loyal competitors (like Trezor) have not yet integrated.

With this solution, Ledger brings a tool that can be understood by all, in all simplicity.
Very clearly, this storage portfolio aims to promote the democratization of cryptocurrencies among the general public while emphasizing security.
Eric Larchevèque, founder and CEO of Ledger, has also confirmed that its Bluetooth solution was just as secure as the previous version.

Some blame it is still not possible to see the balance of your account on the Ledger Nano X, it’s true, (you have to go to the Ledger Live application to view it), but it is ultimately only a detail.
In parallel, there is still much more information on this screen than the previous model: there are 100 applications that can be displayed (obviously, it also depends on the size of each application), against a maximum of 18 on the previous Nano S.

To summarize our opinion after this Ledger Nano X Review, its strengths:

Ledger received the Innovation Honoree Award at the CES 2019 in the Cybersecurity and Personal Privacy product category for its crypto hardware wallet the Ledger Nano X!

Certainly the Best Bitcoin Wallet and Best Crypto Wallet on the market!

If you want to buy the Ledger Nano X: Click Here